NewYorkMusicals.co.uk is a Swedish owned company with offices in Sweden, Copenhagen and Barcelona. NewYorkMusicals.co.uk´s vision is to help all persons interested in getting information and tickets to musicals and theatre plays on Broadway in New York in a quick, secure and smart way. Thanks to our local deals and connections we can always offer compatible prices, also we may be able to get tickets to shows that are sold out locally in New York. As our client, we guarantee that you purchase your tickets safely in a secure environment, and we will do our very best to make your stay in New York just as fantastic as you dreamed of.


A Business ideal driven by passion and interest

The man behind NewYorkMusicals.co.uk, Mr. Marcus Moeschlin has a real passionated relationship to football, musicals, concerts, attractions and other kinds of events. Already as a young 18 year old man he organized tours to rock concerts around Sweden. His career has always been focused on offering people great events and international experiences to competitive prices, not least under Marcus’ time as owner of Box Office in Sweden. Marcus is also one amongst the handful of digital pioneer within the event business, as he as early as 1990 helped to create Global Tickets, a unique network, where 22 countries bought and sold international event tickets electronic between each other. Back in 1990 the competitors still used fax, telex and phones. For this pioneer work Global Tickets received "The Queen´s Award" in 1992 for the best export idea


At our offices in Copenhagen, Barcelona and Stockholm you will find Mr. Kim Harbers Ms. Lene Aagesen, Ms. Camilla Bidstrup, Ms. Lea Levach, Ms Jessica Horton and Mrs Anna Leppaniemi. All of them have a passion for all kinds of events around the world, particularly on musicals and sport.
In short you have many years of experience behind NewYorkMusicals.co.uk, which all together makes NewYorkMusicals.co.uk a local company with global networks and ambitions.

Marcus Moeschlins main company Ticmate has only been in existence since 2006, but has risen steadily every year. Ticmate's vision is to be the leading supplier in Europe for ticket sales of international events and event travelling of all kind. As a part of this strategy Ticmate launched its first musical site; LondonMusikaler.se. Today you can find LondonMusikaler.se in ten different languages in more than ten countries, incl. London-Musical-Ticket.com. The vision of NewYorkMusicals.co.uk is to be available in more than 17 languages, and have customers from more than 60 countries. In 2009/10 Ticmate also launched sites of football tickets for sale in Spain and Italy: BarcelonaFootball and MadridFootball, plus the very popular sites, NewYorkTicketsInternational.co.uk, ParisEventTickets.co.uk, RomeTicketsInternational.co.uk and BarcelonaTicketsInternational.co.uk 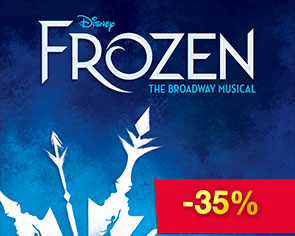 Tickets to Frozen the Musical